Digital technologies already augment and enhance our relationships to the world. If we can make our objects ‘tweet’, ‘cry’ and even ‘monitor our happiness’, why not animals?

What possibilities might emerge when we move beyond embedding passive RFID identity tags into our pets and begin to augment them with ‘intelligent’ networked devices?

As Donna Haraway suggests, historically all domestic plant and animal species have subjected to human intent in stories of escalating progress or destruction, according to taste. Moving into the future, with new scientific and technological tools at our disposal, could our pets became early adopters, serving as a ‘normalising influence’ or ‘human proxies’ before we set about trying them on our bodies?

What will be the emergent interactions and behaviours resulting from such augmentation? If our pets begin to develop a new kind of intimacy with networked technologies, becoming wanderers of hidden data, who will command and who will be in control?

Luka, the Wifi Dog is a fictional scenario that explores these questions, and the emerging interactions as the boundaries between the biological and digital blur.

Set in the fictional future town of Little Brinkland, the project presents the story of Andrew, a Pet Implant Consultant whose business offers to insert a new kind of networked wifi microchip under the skin of pets. He advertises his business using his own augmented dog Luka as a brand ambassador.

The above film captures the story of Luka, the Wifi Dog, as he begins to appear in Little Brinkland.

This diagram shows how the Pet Implant Consultancy inserts the System-in-chip technology with Wimax capacities into the animal. 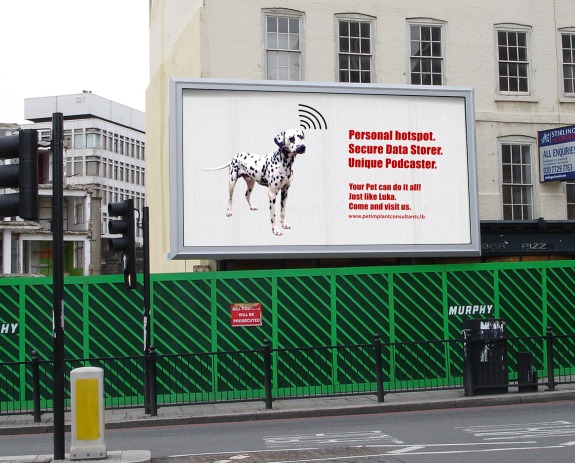 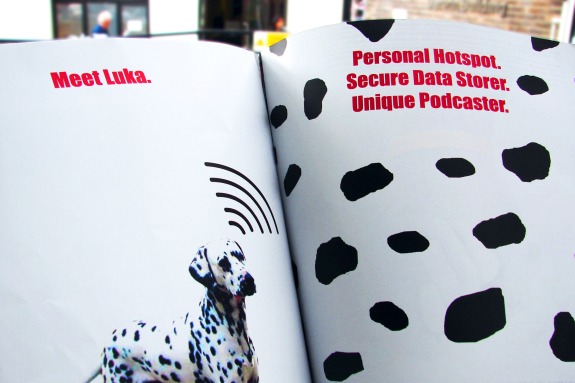 A billboard and an advertisement in WIRED magazine are used to promote their business. Luka is presented as a multifunctional pet offering enhanced features such as a ‘Personal Hotspot’, ‘Secure Data Storer’ and a ‘Unique Podcaster’.

Another billboard on the high street is a call for people to ‘rent a spot’ on Luka. Anyone can advertise their own service or product by placing a message on Luka’s data chip. As the dog wanders the neighbourhood, he will ‘drop stealth advertisements’ on the smart mobile devices he encounters.

By designing a remote control that will manage and control Luka’s data and networks, Andrew attempts to retain control of this new augmented pet.

“Dogs are not an alibi for other themes; dogs are fleshly material-semiotic presences in the body of technoscience. They are here to live with. Partners in the crime of human evolution, they are in the garden from the get-go, wily as Coyote.”

[This project was part of the ‘Futurescapes of Work’ Commission, lead by Anab Jain, and funded by the Helen Hamlyn Centre, Royal College of Art, London and Colebrook Bosson Saunders.]